Interviews and testimony from dozens of union employees describe the Service Employees International Union and its prominent locals as being “plagued by sexual misconduct scandals.”

Bad behavior by top union officials was reportedly well-known among staff, but often swept under the rug by union leaders. Many of the accused continue to hold high-ranking positions at the union.

Watch our video exposing this harassment.

VICTIMS PUNISHED FOR SPEAKING OUT

Victims of SEIU abuse claim they were silenced by the very union that was supposed to protect them. Several employees felt their attempts to speak up about misconduct either went unanswered or caused them to face retaliation from union leaders.

The union even filed a lawsuit against one whistleblower Njoki Woods, who believed she was fired for speaking out. In legal documents from that suit, Woods claims employees were warned that “the SEIU-UHW would ‘go after’ members who made allegations against the union.”

According to legal documents, Lyles has been accused of sexual misconduct by several female staff members. One former union organizer believes she was terminated from her 27-year job with the union for turning down Lyles’ sexual advances. Another claimed Lyles assaulted her in an elevator.

“Since Mr. Hatcher was fired, I have been subjected to shunning in the workplace, nasty looks, and personally overheard staff members refer to me as a whore.”

A lawsuit against SEIU-UHW accuses Marcus Hatcher of sexual misconduct. According to a union staff member, “Regan and his former chief of staff, Marcus Hatcher, were known to party at union events, often drunkenly propositioning subordinates.”

In a sworn affidavit, a former employee even suggested Hatcher may have drugged her drink in an attempt to take advantage of her sexually.

Regan has been accused of sexual harassment in a lawsuit filed against one of the union’s largest locals, SEIU-UHW. Documents from the suit describe how “Regan created an alcohol-fueled party culture, where sexual misconduct thrived.”

Regan has not been removed from his leadership position with the union. The SEIU has reportedly permitted Regan to use union funds to defend himself against sexual misconduct allegations.

“She turned him [BenSaid] down. He then called her a bitch and told her to fuck off. She complained (verbally) to Greg Pullman. She was later terminated.”

According to legal documents and news reports, BenSaid was “known as a regular drinking buddy of Regan, and is alleged to have shared his tendency to sexually harass women working under him.” One employee claimed he heard BenSaid “yell at a subordinate after she refused his sexual advances after a night of drinking.”

“It was not the first time he [Malave] had engaged in sexually inappropriate conduct with me. The events made me afraid and physically sick.“

While working at 32BJ, one employee claimed in an affidavit that Malave sexually assaulted her, and he later admitted to the assault in writing. Malave left the local after the incident was reported (it’s unclear if he left of his own accord or was fired), but he was then recommended for employment with SEIU-UHW by the International union.

According to news reports, several staff members claimed “Lee pursued sexual relationships with female co-workers by employing behavior that went beyond typical flirting; in text and e-mail messages, he sometimes used vulgar language about sexual acts he wanted to perform with them.” Apparently, Lee often pursued “women who were younger and subordinate to him, putting the women in the difficult position of dating — or rejecting — a superior.”

Lee was allowed to stay with the union. He was even selected to join the Harvard Trade Union Program, a prestigious opportunity for labor leaders.

Over 60 staffers signed a petition requesting the SEIU look into sexual harassment allegations against Manteca. One staffer described Manteca as “an absolute sociopath. If he was on the floor of your office, you hid at your desk. You didn’t want to see him. He was such a terror.” Another said “he’s toxic, absolutely toxic.”

Depositions from 16 SEIU employees claim Manteca “not only sexually harassed women in the workplace,” he also “become physically confrontational.” A lawsuit filed against Martin Manteca accuses him of harassing and discriminating against an employee with a disability. A recent jury verdict against Manteca’s union exposed a severe arbitration backlog, with hundreds of members’ grievances allegedly remaining unresolved. An employee who spoke up about this backlog was subsequently fired, which a jury determined was retaliation by union leadership.

According to news reports, Scott Courtney was forced to resign after an investigation into complaints of “sexual misconduct and abusive behavior towards union staff.” Allegedly, complaints about Courtney were reportedly an “open secret” in the SEIU’s Fight for $15 campaign. It was well-known that Courtney often dated subordinate female staffers — he even married one shortly before he resigned from the union.

According to news reports, Fells resigned following an investigation into abuse and sexual misconduct at the union’s Fight for $15 campaign. One employee claimed Fells “made derogatory comments about her looks and wardrobe.” She said she reported his behavior, but nothing came of it.

Evidence suggests SEIU President Mary Kay Henry was aware of the sexual misconduct and abuse being reported at the SEIU and its local unions. Yet, very little was done in response.

Mindy Sturge, who is currently suing the SEIU-UHW for harassment, said she reached out to the International twice to no avail.

SPEAK OUT AGAINST ABUSE

In the 2018 election, the SEIU spent over $40 million on political advocacy, the majority of which went to left-leaning organizations, the Democratic party, and Democratic candidates.

But while political candidates continue to vie for campaign support from the SEIU, the union’s own staff are afraid to stand up for their safety.

This election cycle, will our politicians stand up to the SEIU and give the union’s victims a voice? 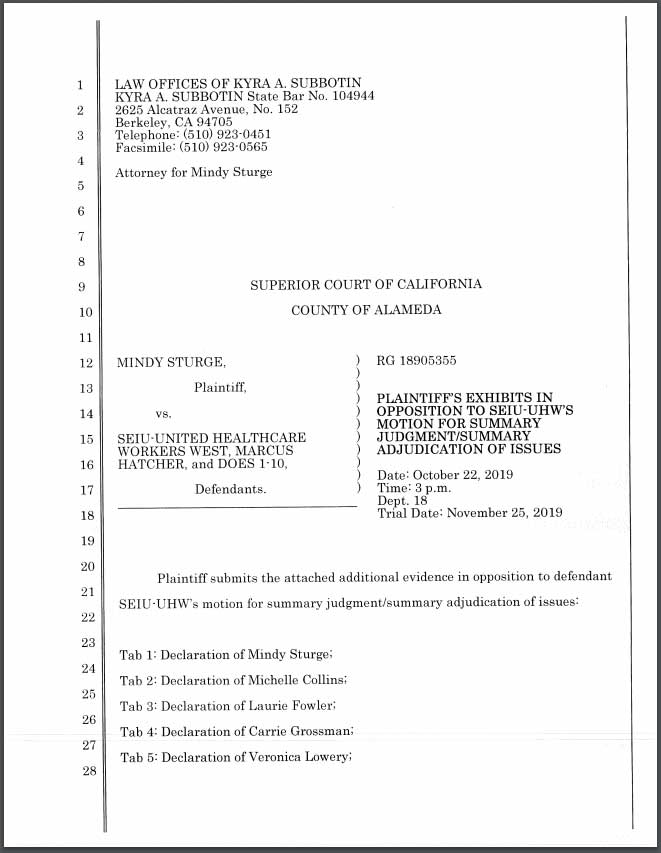 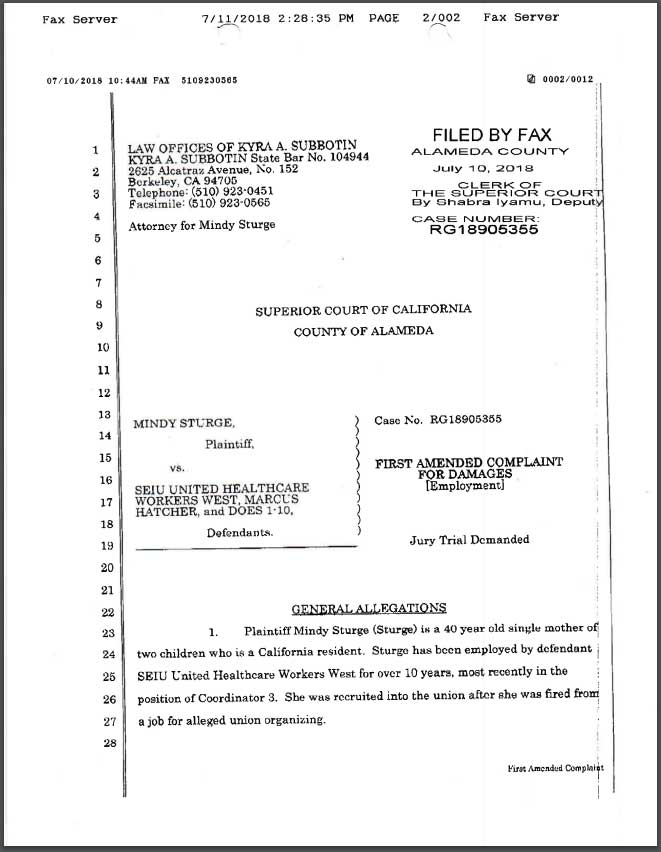 Lawsuit against SEIU-UHW and Marcus Hatcher 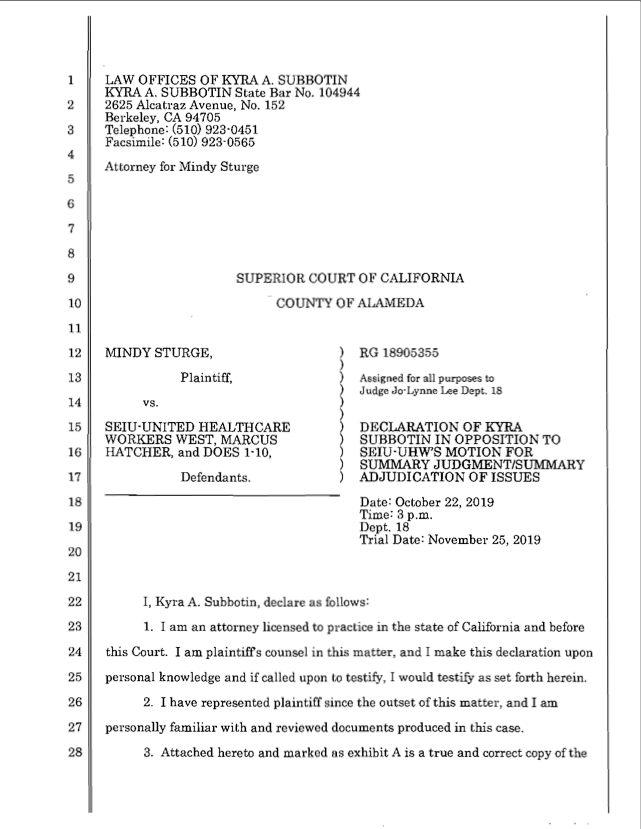 A Project of the Center for Union Facts.
Media Contact: [email protected]